Heart of the Country – trailer

The official “ Heart of The Country“ Trailer! (after the break)

Support Gerald McRaney´s latest movie on facebook and LIKE it!
Official facebook page
There are many photos to explore, you can even take a look behind the scenes!

Or visit the official homepage for the movie:
heartofthecountrymovie.com

END_OF_DOCUMENT_TOKEN_TO_BE_REPLACED

With Gerald McRaney’s new movie „Heart of the Country“ still being in pre-production, we still have to be patient until we can see him again as an actor, this time as the loving father of the lead role, daughter Faith Carraway, played by One Tree Hill actress Jana Kramer.

Filming has started in March in Southeastern North Carolina. The story is about Faith, who – with her husband jailed for Wall Street fraud – leaves her life of luxury behind to return to her rural home and the father and sister she’d left behind.

McRaney on the BIG SCREEN!

Gerald McRaney will be in VERY good company, along with the actors Jaime Foxx, Leonardo DiCaprio, Christoph Waltz and Kevin Costner when starring in Quentin Tarantino’s latest movie

Former „Deadwood“ star Gerald McRaney is ready to get his cowboy hat back on, as the thesp is in negotiations to join the Weinstein Co.’s „Django Unchained“ that Quentin Tarantino is writing and directing.
McRaney joins a cast that already includes Jaime Foxx, Leonardo DiCaprio, Christoph Waltz and Kevin Costner.
Story follows a slave-turned-bounty hunter (Foxx) on a mission to rescue his wife from her sadistic slavemaster.
The pic will be distributed domestically by The Weinstein Company and overseas by Sony Pictures. Production is expected to start this November with the studio slating the pic for a Dec. 25, 2012 bow.
Stacey Sher, Pilar Savone and Reginald Hudlin will produce. Harvey Weinstein, Michael Shamberg and Jim Skotchdopole are exec producing.
Best known for his work on the skein „Major Dad,“ McRaney was most recently seen in the Fox actioner „The A-Team.“
He is repped by Stone Manners Salners Agency and Course Management.

Here are news regarding the long awaited movie where Gerald McRaney has a small role – at least! We are happy for every little glimpse we can catch either on TV or at the movies! 🙂

Here’s the long-promised Tuskegee Airmen bio-drama that George Lucas is putting into theaters next Jan. 20.

“Red Tails” has some decent digital dogfight footage, a corny-weepy speech or two by Terrence Howard, a bit of swagger from Cuba Gooding Jr., with Gerald McRaney and Bryan Cranston along for the ride. Anthony Hemingway was the director Lucas hired for the job. Looks more like what I had heard earlier it was going to be — a cable TV movie. A good one, but doesn’t have the gritty script or tactile production values of a traditional WWII epic. Lucas produced it to look like his last 3 “Star Wars” installments — digital.

Clip follows after the break:

END_OF_DOCUMENT_TOKEN_TO_BE_REPLACED

Another GET LOW interview !

Enjoy this one! You can also see Mackie´s lovely wife Delta in the background. 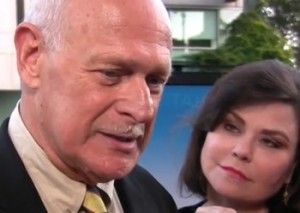 Video, as always, after the break: