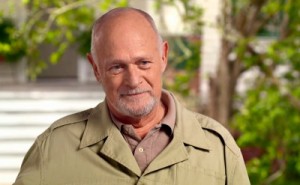 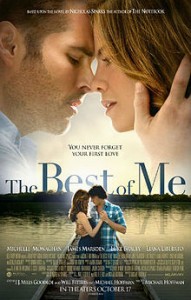 Read more in this interview (LA Times LA Times article, interview by Susan King, photos Anne Cusack), where he says that his unabashed love for his wife Delta Burke fueled his warm performance in this movie.

Gerald McRaney is just an old softie who wears his heart on his sleeve whenever he talks about his wife of 25 years, „Designing Women“ actress Delta Burke.

„I had to have a lung removed. The first thing I thought of when they told me I had cancer was that I want more time with my wife. At my six-month checkup, when they told me, ‚We got everything‘ and there’s no sign of it coming back, one of the first things I thought is: I get some more time with her.“
You know that phrase ‚They don’t make them like that anymore‘? He is one of those. – „Best of Me“ producer Denise Di Novi

His unabashed love for Burke fueled his warm performance in his latest movie, „The Best of Me,“ which opens Friday. Based on the bestselling romantic novel by Nicholas Sparks, the drama revolves around two former high school sweethearts, Dawson and Amanda (James Marsden and Michelle Monaghan), who reunite after 20 years when they return to their hometown for the funeral of their friend Tuck (McRaney).

Two decades earlier, as a widower grieving over the loss of his beloved wife, Tuck takes in Dawson, who comes from a ruthless criminal family and looks to Tuck as a second father. Tuck also encourages and nurtures the teenager’s romance with the wealthy Amanda. Tuck recognizes that just as with him and his wife, the young couple are soul mates. (Luke Bracey and Liana Liberato play the young Dawson and Amanda.)

„One of the approaches I took with the character was the losing of his wife caused him to build up walls because that pain was an overwhelming thing for him,“ McRaney said recently over lunch at the Four Seasons in Los Angeles. „I think he’s isolated himself, and this kid brings down his walls and brings him back.“

„I think, ultimately, everybody is just looking for love,“ said the actor, whom „Best of Me“ producer Denise Di Novi described as an old-fashioned gentleman. „It doesn’t have to be romantic love, but you have to have that in your life. We are social creatures. “

Di Novi said it’s eerie how similar McRaney is to Tuck. „Let me tell you, Delta Burke is one lucky lady. I don’t think I have ever met a man more in love with his wife.“

The producer had just worked with McRaney on the Will Smith romantic caper comedy „Focus,“ set to open next year, and brought him to the attention of „Best of Me“ director Michael Hoffman.

„You know that phrase ‚They don’t make them like that anymore‘? He is one of those,“ Di Novi said by phone. „He is just a kind of stand-up, solid, honest, truthful guy. He has a lot of integrity and just the kind of guy you would want to be in a foxhole with. Whatever you throw at him, he knows how to make it work. I would have a part for him in every one of my movies if I could.“

McRaney, who began his career at a repertory theater company in New Orleans, had just flown in from North Carolina, where he’s shooting D.J. Caruso’s „The Disappointments Room.“

„It’s sort of a gothic horror story,“ said McRaney, who plays a ghost in that film. „My role is very small, but the thing is, I am the horror! I play a guy from the 1890s who is still sticking around the house.“

McRaney had a deliciously villainous recurring role on the recently canceled A&E contemporary western police series „Longmire,“ in which he played a heartless real estate developer who may have murdered his small-town sheriff son in the final episode.

McRaney was at the top of his game in the Netflix series „House of Cards“ as Raymond Tusk, a powerful, manipulative billionaire businessman who tangles with Kevin Spacey’s ambitious, psychopathic U.S. vice president, Francis Underwood.

The actor was a revelation to Spacey.

„Having admired Gerald’s work for so long and knowing his dedication to his craft — his being a true man of the theater, his professionalism and work ethic didn’t surprise me,“ Spacey said by email. „Discovering his sense of humor, his ability to roll with the punches and the feeling that he was going toe-to-toe with me — whatever the scene required — made working along side him in Season Two a complete delight.“

„It’s like an ordinary athlete having his fantasy come true,“ McRaney said. „He’s playing in the NFL, and he’s got Peyton Manning as his quarterback. You are catching passes from the best there is. It’s that good.“